For the new year, Audi may have taken some resolutions. If they have, the first among them will be obviously on expanding their electric cars lineup. With the first among them being the 2021 Audi Q4 E-Tron, Audi will launch multiple cars under the e-tron nameplate. This is also the first Audi to build upon Volkswagen’s MEB modular electric vehicle platform, which means that the 2021 Q4 E-Tron will be different from last year’s Q4.  As we have mentioned, the 2021 Audi Q4 E-Tron won’t be alone this time in the e-tron family. It will be accompanied by both e-tron SUV and an e-tron GT sedan in the future.

Since Audi has also showcased their Q4 e-tron Sportback concept car, we can expect this car to join the e-tron lineup pretty soon. We will discuss all of these e-tron’s when we know more about them. For now, let’s discuss the 2021 Audi Q4 e-tron.

Audi Q4 E-Tron from the outside

Even though this car is still in the production line, Audi has already showcased this vehicle on their official website. And looking at that, we can say that Audi has managed to make it look different from their regular cars. Yet anyone could distinguish it as an Audi.

Like the first generation, this Q4 will also sport a structured closed surface board—an octagonal frame that replaces the regular radiator grille. Standing on the large 22-inch wheels, the Audi Q4 e-tron will surely have the guts to stand above the crowd.

Inside The New E-tron

The interior of the new e-tron will continue to carry forward all of Audi’s design elegance and technology advancements. This car will also have a touch screen infotainment system, shited slightly towards the driver’s side. Since the touch screen is a standard in today’s cars, especially in electric cars, this is nothing to be excited about. We need to wait to see, how Audi will utilize this in order to provide the best set of features for their users with it.

While looking at the Q4 e-tron concept, we could see that it is strictly a four-seater.  The front and rear bucket seats will be covered in faux-suede upholstery with e-tron–branded detailing under the headrests. We could see similarities between the Q5 a lot. If it is true, then there will be plenty of space inside as the Q5. 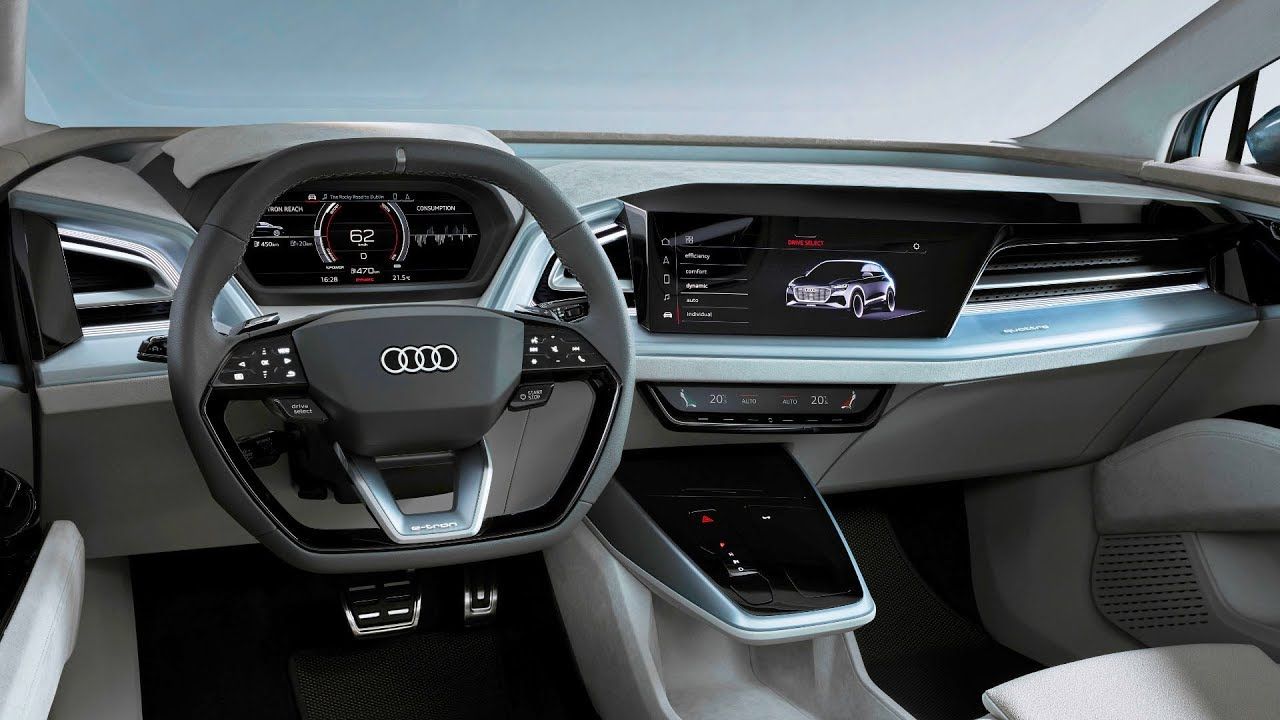 Speaking of safety, this vehicle is expected to have collision warning, automated emergency braking, blind-spot monitoring, and rear cross-traffic alert as standard with an option to choose adaptive cruise control. Since we haven’t been able to see its crash tests, we can’t comment on how strong this vehicle will be. But expect it to carry that classic Audi strength.

How will the Q4 e-tron perform?

From the report’s we can hear that the 2021 Audi Q4 e-tron can output 300hp from its electric motor. This engine will be able to achieve 60mph in just 6.3 seconds. Yes, this is not powerful enough when pitted against its gasoline-powered cousins.

The battery pack will be 82- kWh, which could go all the way up to 280 miles, we can expect the range to be much more by the time it will be made available to the public. This battery pack could be charged by a 125-kW. This could charge the battery up to 80 percent in less than thirty minutes.

Audi has given a hint that the price of the Audi Q4 e-tron will start at $45000. At this price, it will be competing against small luxury vehicles such as the Tesla Model Y and Volvo XC40 Recharge. Reports suggest that this vehicle has already entered the production line. If things get right, we could expect an official announcement from Audi by mid-2021.