by Ubham Sharma
in Cars
0

When it comes to collecting cars, many wealthy people come on the list. Collecting cars is also an art as these cars are a masterpiece. The collectors pick their cars very carefully. And these collectors are not only purchasing cars to keep in their garage but also know about them. Keeping exotic, rare, and luxury cars have become a tradition of these wealthy people. The only restriction in having a car collection is money. That’s why Big entrepreneurs, celebrities, sports people, and sultans own a massive collection.

Today, in this article, we will discuss the top 10 richest car collectors. These are people from different backgrounds, varying from a Sultan to a musician. Read the full article to know who all has which antique and rare cars.

Hassanal Bolkiah is the Sultan of Brunei. He became the Sultan in 1967 and is still in his reign. Forbes estimated his net worth at $20 billion. They also gave him the title of the most prominent collector of cars. He owns the most famous royal palace on Earth. He has a massive car collection. With rough data, he owns more than 7,000 vehicles worth more than $5 billion. With this enormous car collection, he is ranked number one in this list of the Top richest car collections. He has the most extensive private car collection in the world. His car collection includes Ferraris, McLarens, BMWs, Mercedes, Rolls Royce, and the list can go on. He also got the rarest and limited edition vehicles with the most expensive price tag. He also has some customized luxury cars such as Ferrari Mythos, Bentley Java, and Porsche Carma. 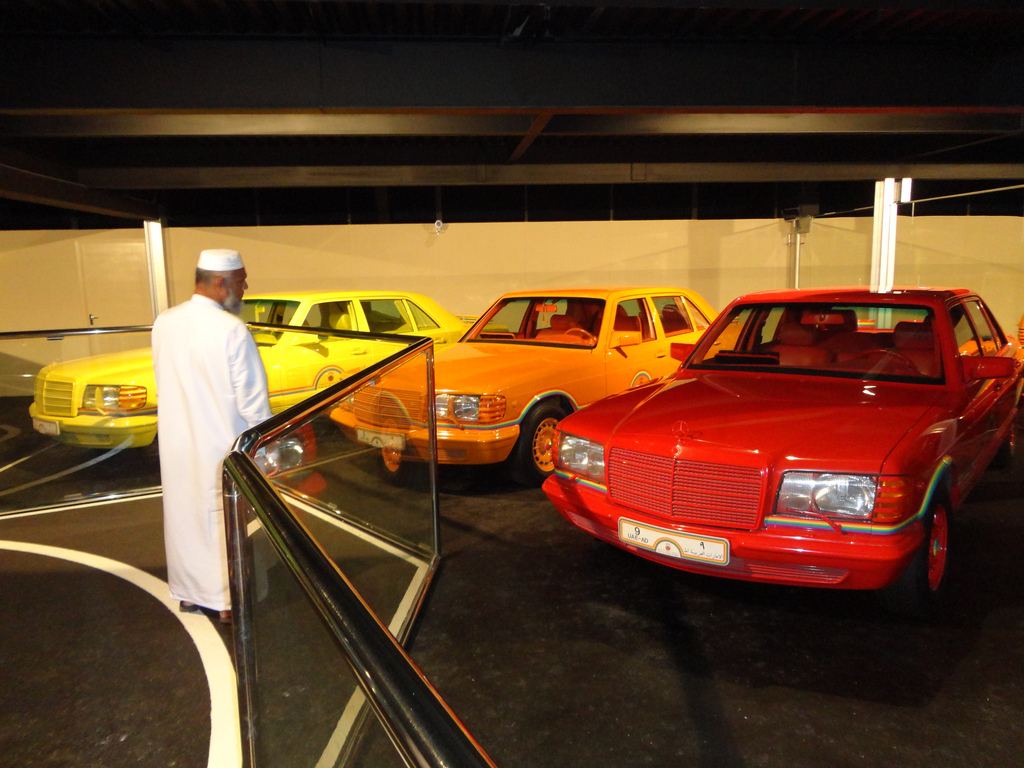 Second on the list is Rainbow Sheikh. He is a billionaire, and he is a part of Abu Dhabi’s ruling family. He owns a massive car collection. His real name is Sheikh Hamad Bin Hamdan Al Nahyan, but how did he get “Rainbow Sheikh” as a short name? He owns seven Mercedes S-class vehicles, and each of the cars has seven different rainbow colors. He got customized cars like Mercedes monster trucks, Dodge Power Wagon, and Bedouin Caravan. With his bags of money, he had converted an ancient pyramid into his garage. If his car collection is not enough to tell how rich he is, then this Pyramid garage should be enough.

Leno is a comedian, YouTuber, and former host of Tonight Show. He is a big car collector. Leno even made a YouTube series to showcase his collection, which is currently being telecasted on TV. He got a lot of rare and antique cars. Jay Leno got more than 200 vehicles in his collection, which includes 180 cars and 160 motorcycles. He also owns 22 steam-powered cars and 25 classic race cars. His most expensive car is Duesenberg Walker Coupe, with the worth of this car being $20 million. His total car collection is between $52 Million – $100 Million. He routinely buys and sells vehicles. For that reason, his collection value can fluctuate.

Lingenfelter is an American business person. Also known as the founder and owner of Lingenfelter Performance Engineering, his current net worth is more than $5 Billion hence, one of the richest car collectors. According to The Detroit News, Ken owns more than 250 cars in his collection, including Corvettes, Muscle cars, and exotic cars. He also has an AMC Pacer. He owns a lot of rare cars. His garage is 40,000 square feet in size, attached to his house in Michigan.

One of the richest people in India is Mukesh Ambani. He is also on the list of the top 10 richest people in the world. And he is a massive car collector. Ambani owns more than 170 vehicles. As of 2022, Ambani’s net worth is $105.2 billion. For that reason, he owns every car he wants. His car collection is worth more than $20 billion. This collection includes a Maybach 62, Benz S-class, Bentley Flying Spur, Rolls-Royce Phantom, and many more. His car collection includes a few heavily fortified cars; he gets a Z-security cover.

He is a Luxembourgish-Spanish businessman. Lopez work in the field of technology, energy, and sports. As the chairman of the Lotus F1 team, Lopez works in Formula One racing. During an episode of the BBC TV show “Top Gear,” we looked at Lopez’s car collection. His collection includes rare, vintage, classic, muscle cars, hot rods, and many more types of cars. His entire car collection is valued at more than $100 million.

As the head of a prominent Russian family, Lomakov is a Russian businessman. He is one of the most popular and richest car collectors. His huge car collection includes more than 120 cars. The collection also has a Mercedez Benz owned by Adolf Hitler. According to him, Nazi cars are “symbols of Russia’s victories.” Lomakov has a museum for his cars and bikes. He got a lot of antique cars like the 1977 Chayka GAZ-13, which doesn’t even exist anymore.

The English singer and writer Jay has an impressive car collection, with a total of 70 vehicles. Currently, his net worth is more than $70 million. Jay Kay collections is a mashup of modern marvels and classic beauties. He owns a Mercedes 600, which Coco Chanel earlier owned. He is a car geek and loves finding rare and antique cars.  His collection includes Mercedes, Bugattis, Rolls-Royces, Lamborghinis, Aston Martin, and many more exotic brands.

One more on the list of richest car collectors, Nick is the co-founder of the Pink Floyd band. He is an English Drummer. He is a musician, composer, author, and auto racer. Mason owns more than 40 rare and exotic cars. Nick is fond of the Italian sports car. He often visits automotive shows to showcase his collection. The collection includes Bugatti T35, Ferrari 213 T3, McLaren F1, Porsche 962, Aston Martin LM18, and many more iconic cars. His collection is valued at more than $20 million.

These 5 Cars Have The Best Air Conditioning

These 5 Cars Have The Best Air Conditioning