The Hyundai Santa Cruz is a concept truck from 2015 that is now ready to become a reality. This is going to be the first pick-up truck from the Korean company, Hyundai. The concept truck was a different take at the pickup truck. The design is not as revolutionary as the Cybertruck. However, the compact and sporty look of the truck is inspired by Hyundai’s Santa Fe, while having much more practicality, with a decent size bed and 4 full-sized seats. This will not be the biggest truck, but the anticipation for this compact truck is present. The Hyundai Santa Cruz is expected to release in mid of 2021.

The concept Santa Cruz truck was celebrated as a diesel engine vehicle, but the world has since moved to more efficient petrol or electrical options. The Santa Cruz may have a diesel variant, but the petrol engine option is also expected. The concept car had a 2.0-liter diesel turbocharged engine. There is no hybrid or electrical option for now, as Hyundai is only just starting its electric car line-up. Among the planned electrical vehicles, there is such a truck, but it will be confirmed at a later date. The Diesel Engine will be capable of bringing much of the functionality that is expected from a typical truck. While it will do well in your day-to-day scenario, the truck will also be capable of towing, off-roading, and climbing hills with ease.

The estimated price for the truck is around $25000, going up to 40-50 thousand dollars depending on the options on top. While all this is confirmed, any other information is not yet revealed. We have no idea about the interiors or the full list of features that will come with the truck. However, it is supposed to be a high tech truck, with full infotainment systems usually seen in Hyundai vehicles along with the required safety features. 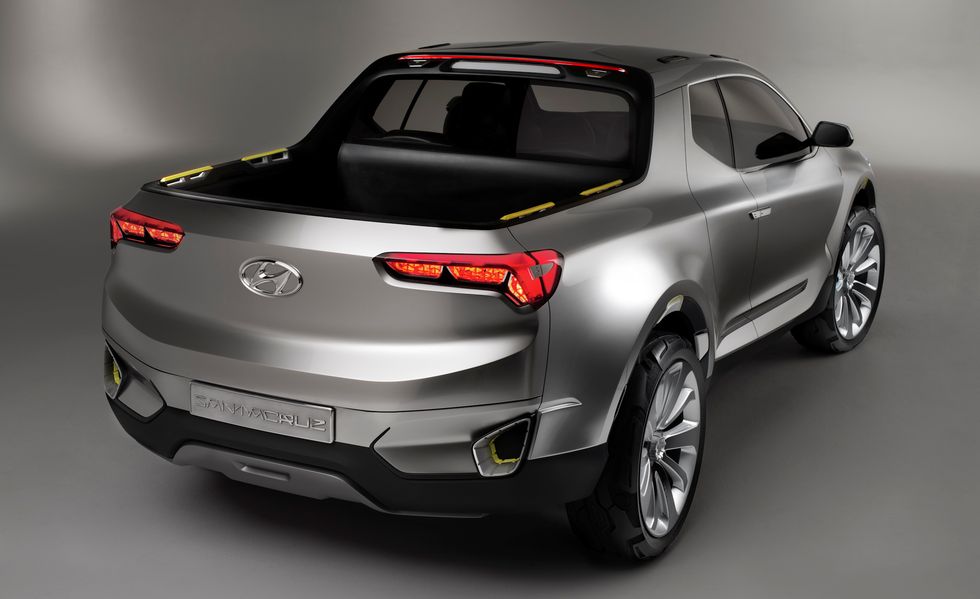 While the interior is not confirmed, the outside of the truck can be guessed in much more detail. The concept truck that was seen in the 2015 Detroit Auto Show, was a two-seater, compact vehicle. It was an aggressive sporty truck that acted as the crossover with the Santa Fe. Since then, it was confirmed that the truck-based on that concept would be out as a production vehicle. While some of those things cannot be brought to the production units, it gives us some insight into how the exterior of the actual 2021 Hyundai Santa Fe will look like.

The leaked pictures for the truck show that the rims are different. They look much more rugged that can support the weight of such a heavy truck. The bed area and the side curves are covered, while the front end looks about the same as the concept. There are two huge grills in front to put maximum air into the engine area for cooling. There are some differences in the front bonnet as well. While it’s based on the concept, things on the truck have gotten more practical while keeping the sporty look. The back-end is something that was brilliantly done for the concept and gained much interest from buyers, and it is yet not revealed. Stay tuned with us for more on the Hyundai Santa Cruz truck as it comes out.